A tool to visualize serverless resources in Cloud Formation stack across multiple AWS accounts Serverless Stack Visualizer was published on 2020-01-29 and was created by Simon Karman.

The serverless stack visualizer is a tool to visualize serverless resources in Cloud Formation stack across multiple AWS accounts.

So now we have one application that exists in multiple CloudFormation stacks in multiple AWS accounts and a different version of the application might have been deployed to each. Keeping track of which function is deployed where, or quickly navigating through the AWS console while switching accounts can both be challenging tasks.

To overcome these challenges I build an serverless-stack-visualizer which can visualize the current state of your serverless AWS resources (such as Lambda functions, DynamoDB tables, and S3 buckets) across different CloudFormation stacks and even across different AWS accounts. 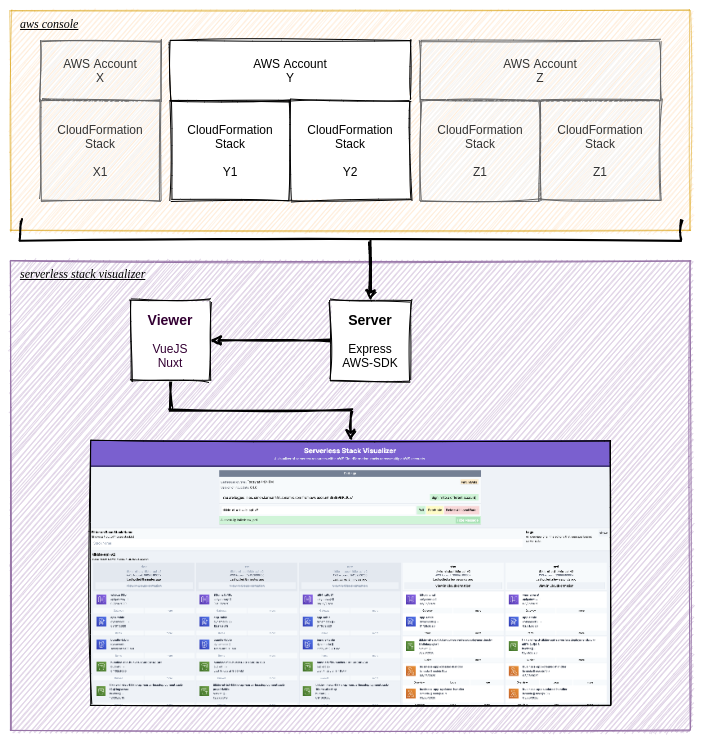 The tool can be run locally on your computer. To run it you need to run both a server and a client.

The responsibility of the client is to show all the relevant information to the user, request data at the server, and link the user to the resources in the AWS console. The current account that the user is signed in to is the account for which the resources will light up. The other resources will dim down and won't be clickable anymore, once a user switches to another account this status changes and the resources and stacks corresponding to that account will light up and become available to click on.

The server and viewer are both written in JavaScript. The server build using Express and the client was build using Nuxt (a VueJS framework).

This pull functionality is defined in the service layer of the server. It pulls information about the AWS CloudFormation stacks using the AWS SDK for JavaScript. In the code snippet below you can see how it gathers all information of a single stack by the baseStackName (for example company-#-application-stack) and the current stageName (for example tst or acc).

It first fetches information about the stack, then gathers all resources of that stack, then filters these resources into smaller groups containing only the relevant data, and finally returns all that relevant information including metadata to the caller.

The tool gives a really nice overview of the current state of the Cloud Formation stack and its resources across multiple AWS accounts. Because of the clear visualization of which data was pulled from which account and at what point in time, it is always clear what the relevant information is.

The fact that you're able to click on the resources such as dynamodb tables to directly see all the items that are in it, to to directly jump to the logs of a certain lambda on a application of a certain environment can be very helpfull.

I hope to have inspired some of you to build a similair tool in your own work environment, and don't hesitate to contact me using the contact form if you would like to discuss how to build this yourself.

Similar projects
If you like projects like this one you might also be intersted in other serverless-, aws-, and cloudformation-projects.
serverless
aws
cloudformation
Serverless Stack Visualizer (serverless-stack-visualizer)